It is not easy to walk alone in the country without musing upon something.

I ran and ran and ran.  I sniffed the flowers.  I sniffed Mr. Bailey’s property lines.  I ran.  I hurtled through the bushes, the trees, the undergrowth.  I ran. 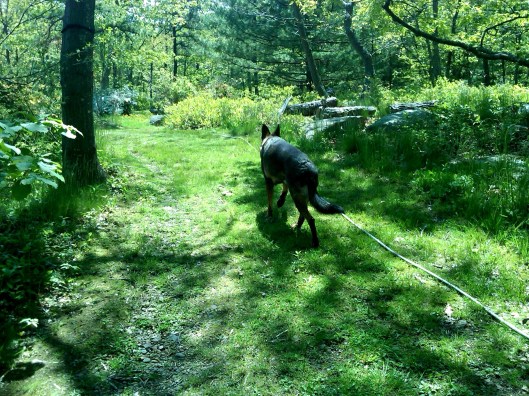 No matter how much I ran, I could not push the thoughts out of my head.  Edgar had much to tell during his mother’s day weekend visit, and his words have been running through my head again and again since then, at a faster and more persistent pace, even, than I, in my Olympiad greatness, can achieve.

“The coyotes are getting ready to make their move,” Edgar told me.  “They suspect that we are investigating their activities and they have changed their timeline.”

“But what are they planning to do?” 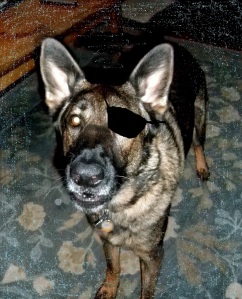 “I can’t be absolutely certain, but from what I’ve gathered, they want to live a lifestyle more like yours and Mr. Bailey’s and Maggie’s.  They want to be snuggled and teased and fed in a bowl.  They want vet visits where lights are shined in their ears and their ribs are felt by people with advanced degrees.  They want to be played with and disciplined and crate-trained.

“They want all this, but they also want their freedom.  They want the moonlight on their fur and they want to howl in the night in order to strike fear into all of civilization.

“To achieve this, they have made a pact with domesticated animals sympathetic to their cause.  In exchange for their cooperation, the coyotes will allow these domesticated pets to roam free in the forest and will let them take forays into the world of the wild.”

“Because, Edgar, they will not keep their part of the deal.  They will attack the animals they made the bargain with once they get what they want.  Further, they are not fully in control of their wild instincts.  They will tear homes apart: they will eat carpets and shred drapes; they will howl and wake all the babies; they will scratch the floors; they will bite the hands that feed them.”

Even as Edgar said it, I knew it was so.

I realized then how much I had depended on Edgar, and how much faith I had put into believing that he would somehow make everything turn out all right.  I needed to help him, now, to formulate a plan.  I told him I would think on it, and he made plans to come to see me again as soon as he might, so that we could discuss our next move.

“Leave word with the chickens if you have news,” he said.  “I’ll do the same.”

Since that night, I have woken, legs pumping in terror, many times.  The strain of this situation upon my nerves has been great.  This weekend, as I ran past the chickens’ enclosure, I listened for word, but there was none…and I had none to leave. 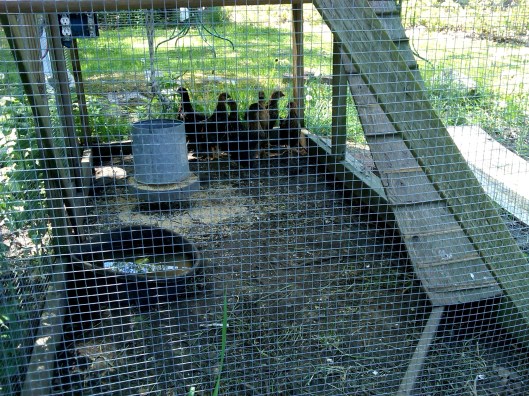 Mr. Bailey observed my frantic racing and bid me pause.  “You will run yourself ragged, Humphrey,” he said.  “This is not the way to solve a problem.  Rest, sniff about you, and the solution will come to you when you least expect it.”

Working hard to place my trust in Mr. Bailey’s oft-proved wisdom, I slowed my pace and smelled the hydrangeas and other lovely plants of the yard.

I have no plan yet, but I will make one.  Together, Edgar and I will save us all.